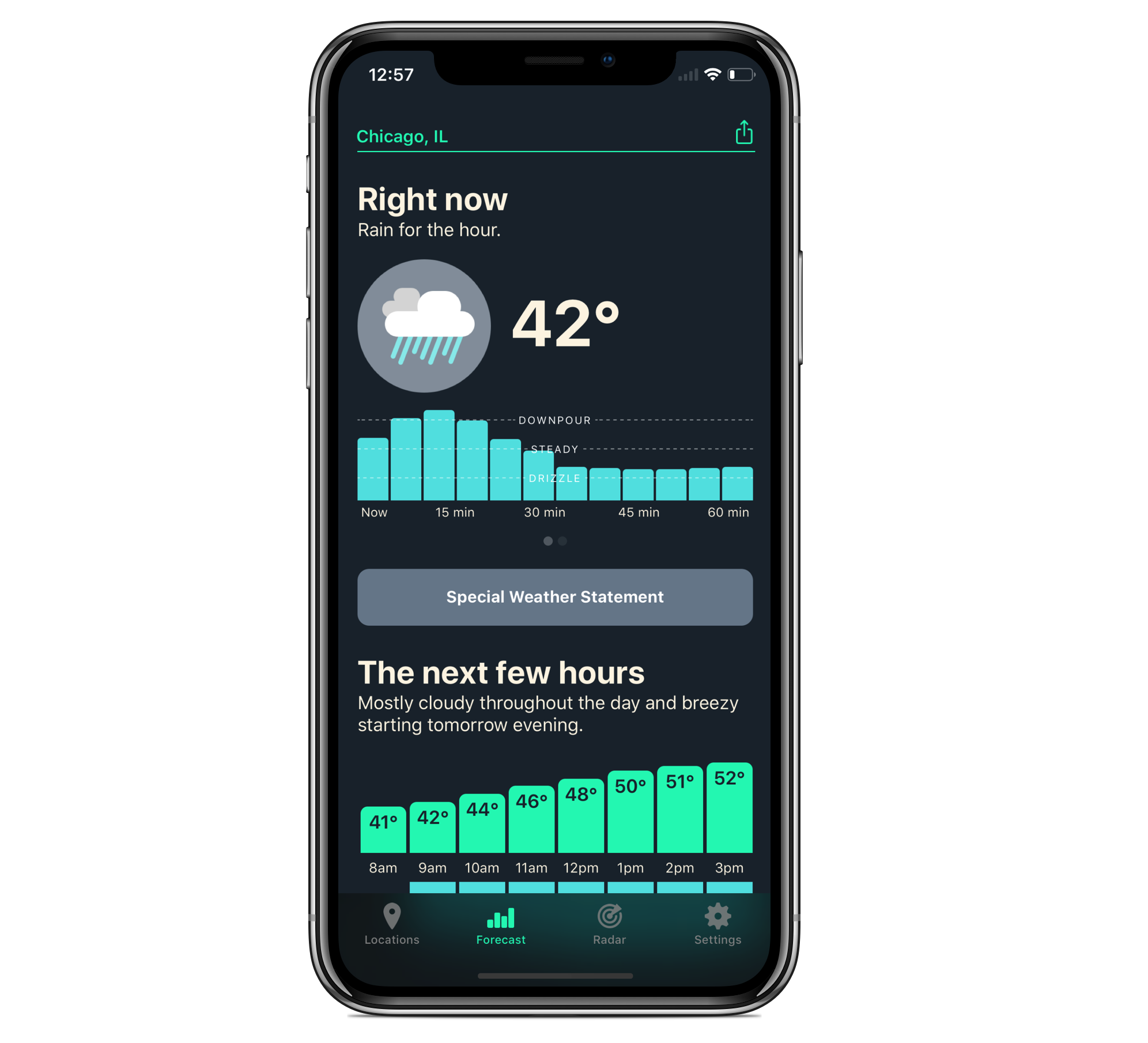 We made a brand new Hello Weather, for the love and fun of it. Here’s the backstory.

Throughout 2017, our friendly weather app has been totally stable, paying its own bills, and getting great reviews. We launched a steady stream of swell updates—and an Android version—but otherwise kept things on the mellow.

Then Apple announced iOS 11 and iPhone X, and some serendipity happened: Apple’s design language started to match up with ours.

iOS 11 has strong typography, with big bold headers and heavier body text throughout. That’s how we like to roll (we’ve been using a similar style since 2015), so we thought this would be an interesting opportunity to join visual worlds and give Hello Weather a fresh coat of paint.

We also wanted to add a radar, upgrade a bunch of stale tech, and improve the app’s sizing, contrast, and general readability.

I mocked up what such a version might look like with bigger elements, bolder colors, and a tab bar to switch between the forecast and radar views. 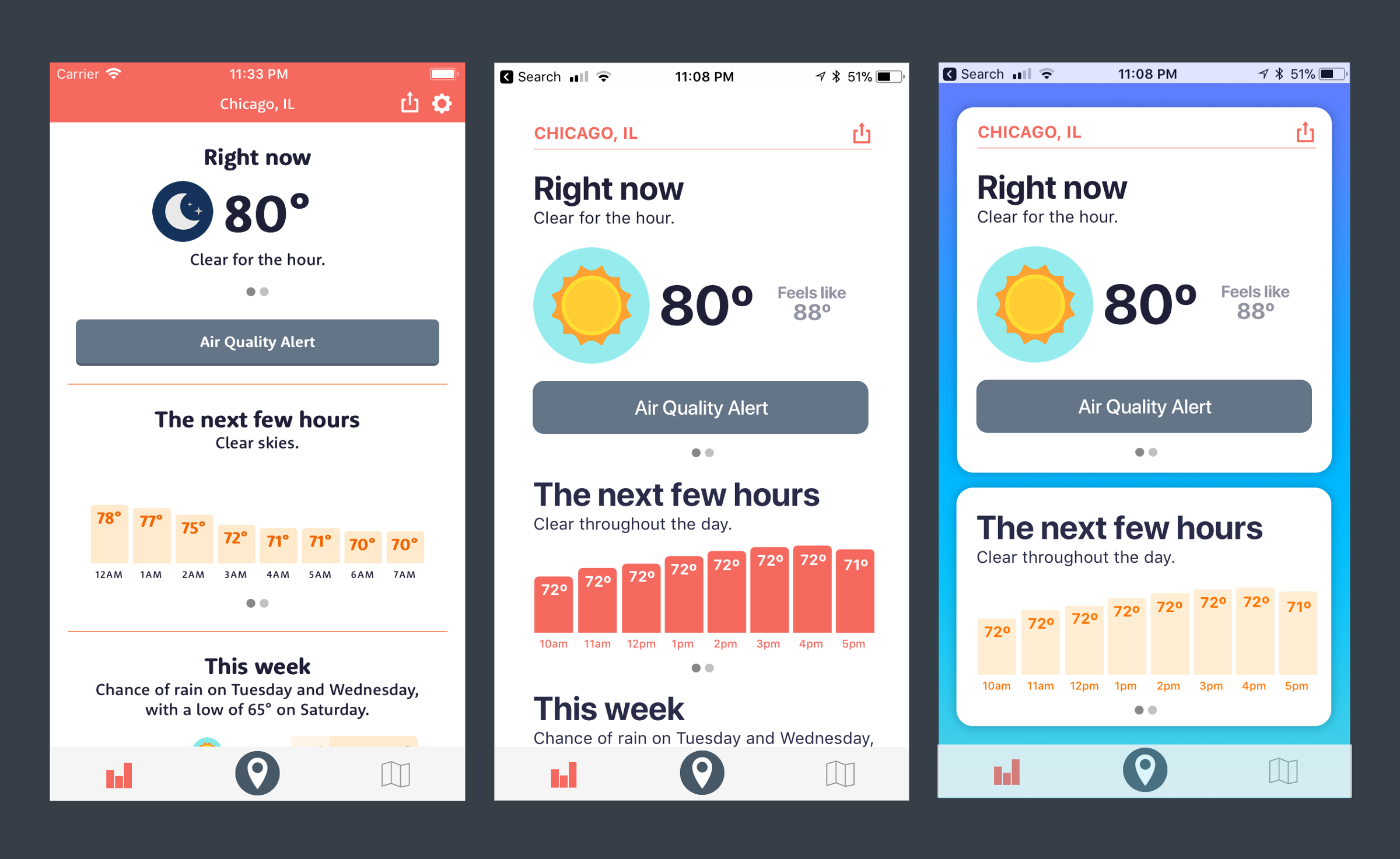 After seeing the mockup and liking it, we decided to give it a shot— hopefully to coincide our major release with the iPhone X launch a few months later.

I’m happy to say we just barely made it! And the new version is HOT SAUCE.

In addition to switching fonts (so long, dear Rooney Sans 😘) we took the design to its minimalist ideal by removing extra ornamentation and enlarging everything as big as it could go. We also switched from pale colors to a brighter palette with higher contrast, and added more themes. 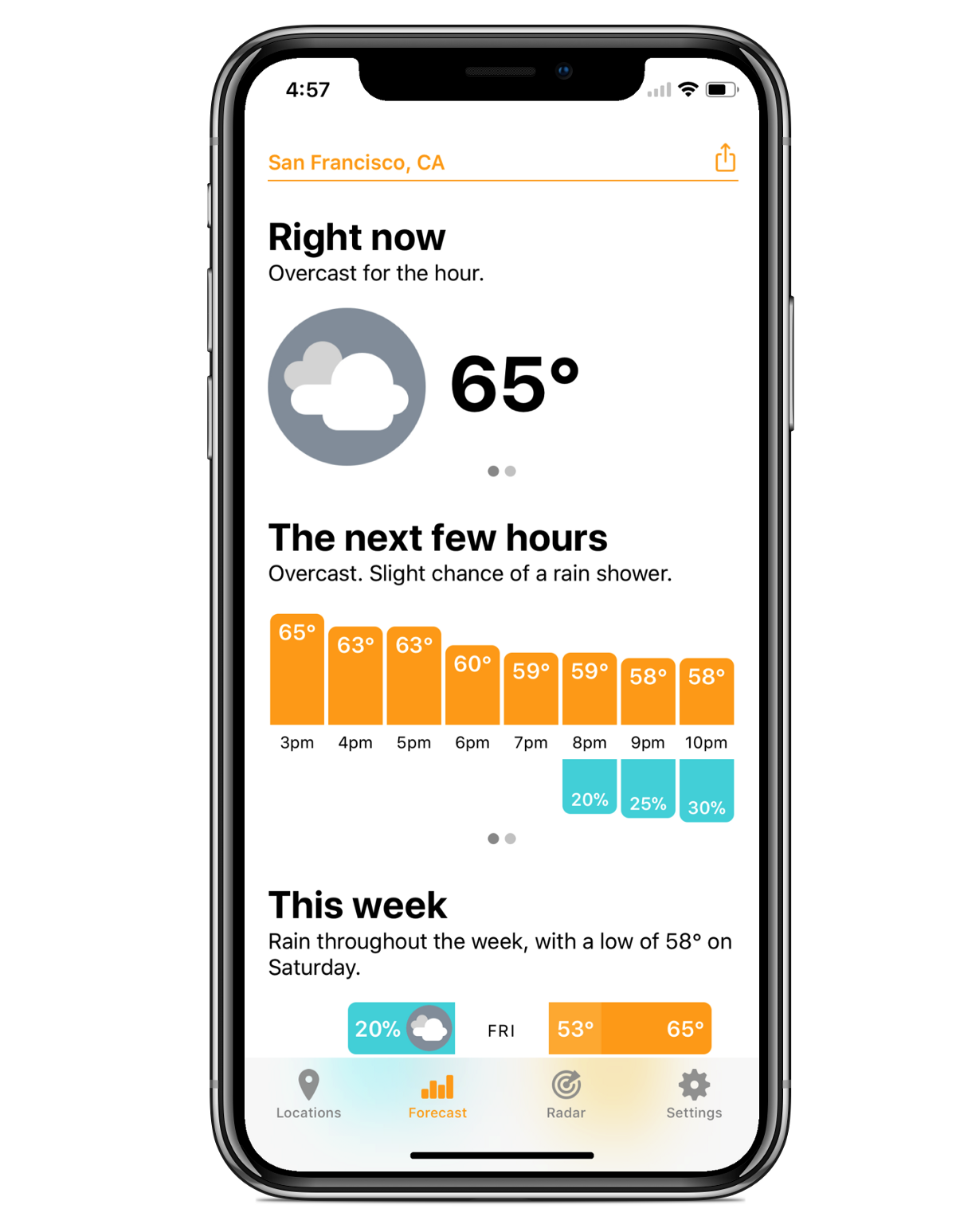 The best device for this version is obviously the iPhone X. It’s a tall phone, so we felt that all the important navigation needed to move to the bottom. (Trevor also felt strongly that the tab bar sucked, but we grew to love it.)

Our previous night mode was half-assed: the forecast view turned dark at night, but everything else stayed light all the time. Now we whole-assed it and themed every single screen in the app for day and night. 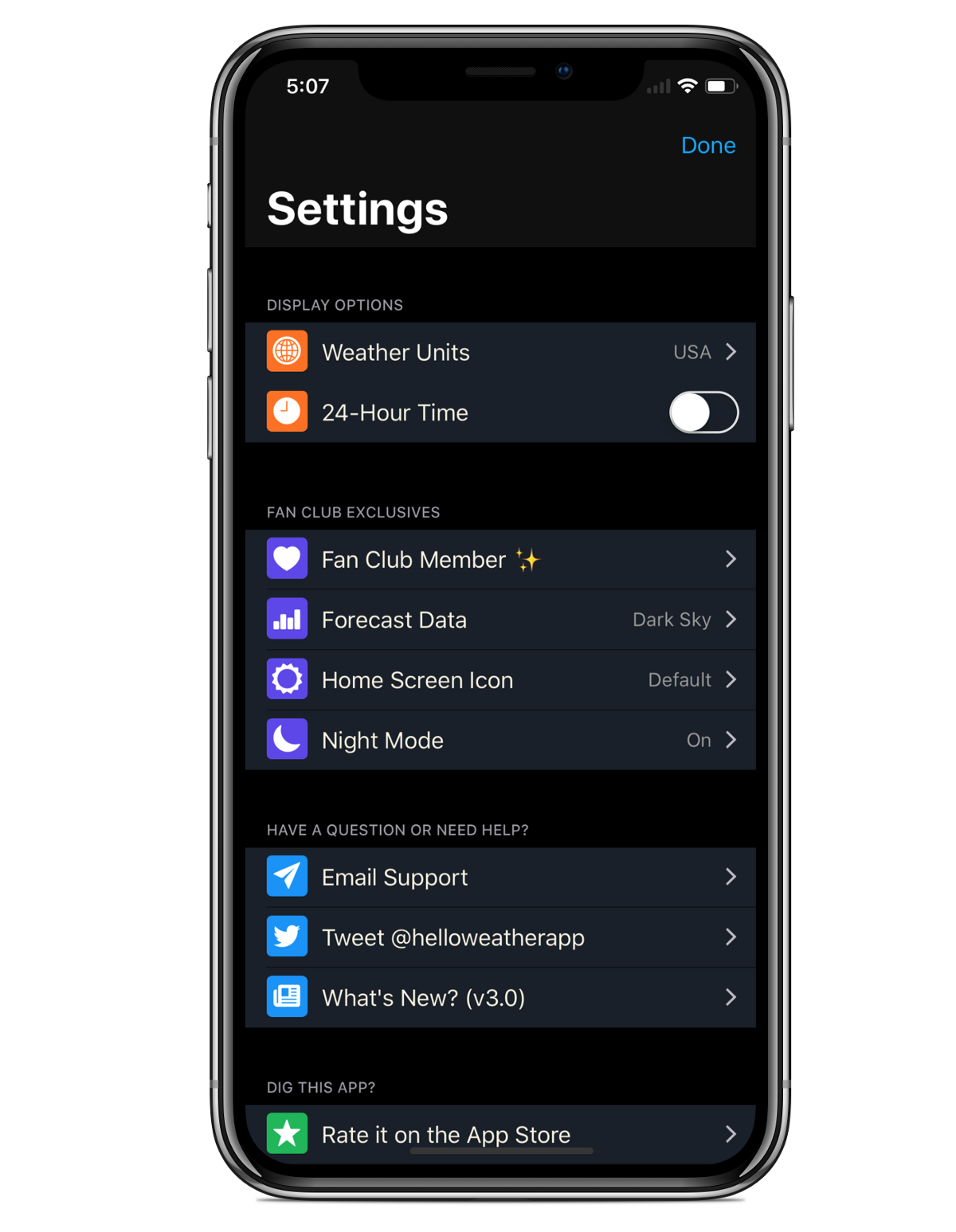 These are supplemental views, so we had mostly neglected them for 2 years, but they got first class treatment this time. Along with lots of visual improvements, we also made it faster to add, reorder, or delete locations.

We finally added the one big feature we still wanted: RADAR! We’re still figuring this out. For now it only works in certain places (US, Canada, Australia) but it’ll get better once we learn what’s missing. 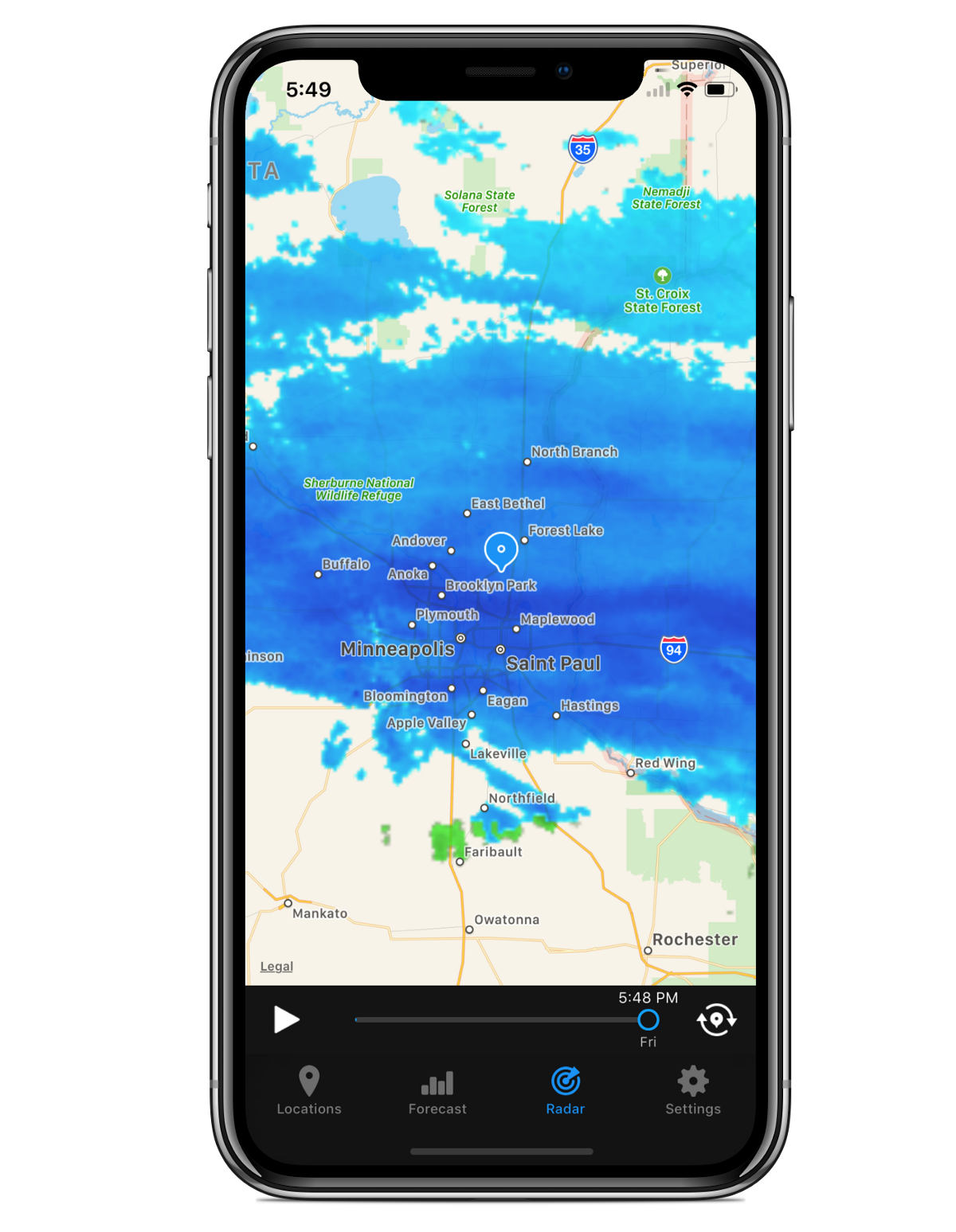 Trevor’s been on a deranged mission to try every weather data provider on Earth and get them all plugged into the app. In this release we added Aeris, AccuWeather, and The Weather Channel as experimental sources you can try.

We’re simplifying our Fan Club pricing in this version. Instead of 1-year, 2-year, and Lifetime options, we’re going with one price: $4.99/year. If you previously bought a membership, that’s still honored for whatever term you bought.

We upgraded a bunch of stuff you can’t see, like our locations search, payments system, and themes setup. It should all work a lot better now.

Fan club members of yore might notice that our old Experimental Mode is gone. We still love this idea, but it didn’t end up working so well — we didn’t have that many experiments worth showing, and people were confused what it was for. We decided to nix it.

So that’s it for the big stuff! There’s also a lot of small stuff. You’ll see when you try it.

FAQs so everyone will stop asking

Q: Are you going to make a Watch app? Q: Or add push notifications? Q: Or add an obscure barometric pressure format that’s only used in Southeast Luxembourg? Q: Or add pollen and allergy info? Q: And is this new design coming to Android? Q: And will Android get a widget?

Keeping a side project going is tough. Keeping it going long-term is even harder. We’ve been doing this for almost 4 years, and it’s not exactly a trivial undertaking. I occasionally wonder: should we really keep making this thing?

Then I remember the real question is: Do I still want to goof off and build stuff with Trevor and Dan?

The answer is always: OMG HELL YES. And so that’s why this project keeps going—it’s just so much fun to work on it.

Amidst all that fun, the new Hello Weather is the most serious version we’ve ever made. It’s a little more Pro and a little less cutesy, but that’s because we’ve poured even more love and attention to detail into it.

We think it’s something special. Hope you enjoy it too. ❤️